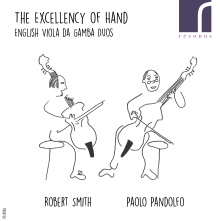 The brilliant cover art work is by Amsterdam artist, Eva Gans. You can find out more about her here: http://www.evagans.nl/vrij-werk/

‘The gambists aren’t afraid to produce robust sonorities in the most extroverted passages, or to whisper to one another when the mood turns austere. In many of the divisions, they share and interweave phrases with a seamless dexterity that rivets the attention. The end result, with a nod to Simpson, is “delight” that can only elicit an active listener’s bountiful “admiration.”’
Early Music America

‘This cd is a delight throughout, bringing together 22 pieces of early music, most of which will be unknown to the majority of listeners. There are works by Christopher Simpson, John Jenkins, Simon Ives plus the gentle intervention of a single work by Robert Smith which is totally in keeping with the seventeenth century surroundings. The sheer grace and delight here speak for themselves – just hear it for yourself!’
Lark Reviews